Visit Online Shop
"It's not just a brush,
it's an experience.
A ritual. It's life changing
and it's your life."
Search the Rosemary & Co Blog

All posts from selected author

This week sees the UK celebrate The Queen’s Platinum Jubilee with an extended public holiday that Rosemary and Co will be observing.

As a result, our offices and production department will be closed as follows:

We will also be closed on the weekend, as normal, therefore we are back open on Monday 6th June. You can still place orders online throughout.

Many of the UK’s cities, towns and villages will be busy organising events and street parties as we approach the celebration of the Queen’s coronation 70 years ago. At Rosemary and Co we are joining The Queen’s Green Canopy (QGC), a tree planting initiative created to mark Her Majesty’s Platinum Jubilee. Everyone across the UK is being invited to plant trees from October 2021, when the tree planting season begins, through to the end of the Jubilee year in 2022. We are so proud to be planting 3 native trees at the Rosemary offices in North Yorkshire, a Field Maple tree, a Beech tree and a Holm Evergreen (wink wink) Oak tree.

Here are some facts about the upcoming jubilee:

1) A jubilee is a special anniversary of an event, especially one celebrating twenty-five or fifty years of a reign or activity!

2) Special jubilees are named after precious stones: Silver for 25th, Ruby for 40th, Golden for 50th, Diamond for 60th and Platinum for 70th.

3) The first British monarch to mark a jubilee in a significant way was King George III in 1809 (below).

4) King George V was the first British monarch in history to celebrate a Silver Jubilee in 1935.

6) The London Underground has a line named after the Queen’s Silver Jubilee, aptly named the Jubilee Line! In May 2022, The Elizabeth Line was unveiled.

7) The Jubilee Line’s colour is grey, representing the silver colour of the 1977 Jubilee!

8) This year’s event will be the first time a British Monarch has celebrated a Platinum Jubilee.

9) The Queen’s Diamond Jubilee Pageant in 2012 was allegedly the ‘world’s largest outdoor party’, when more than 1 million people lined the River Thames to watch 1,000 boats sail down!

10) There will be four days of public celebration for The Queen’s Platinum Jubilee – An extended bank holiday, from Thursday 2nd to Sunday 5th June.

We look forward to helping all your enquiries and orders on Monday. We hope you enjoy your weekend too!

If you’re anything like me then wildlife paintings will bring instant joy and a smile to your face. It was with great pleasure to come across George’s work and I finally get to share his emotive and expressive paintings with you all. Here’s what he had to say earlier this year;

“I’m a 17-year-old oil painter from Chester, England and I’m currently going into year 13. I’ve loved drawing and painting from an early age and my particular interest is wildlife, although I do try other subjects as well. 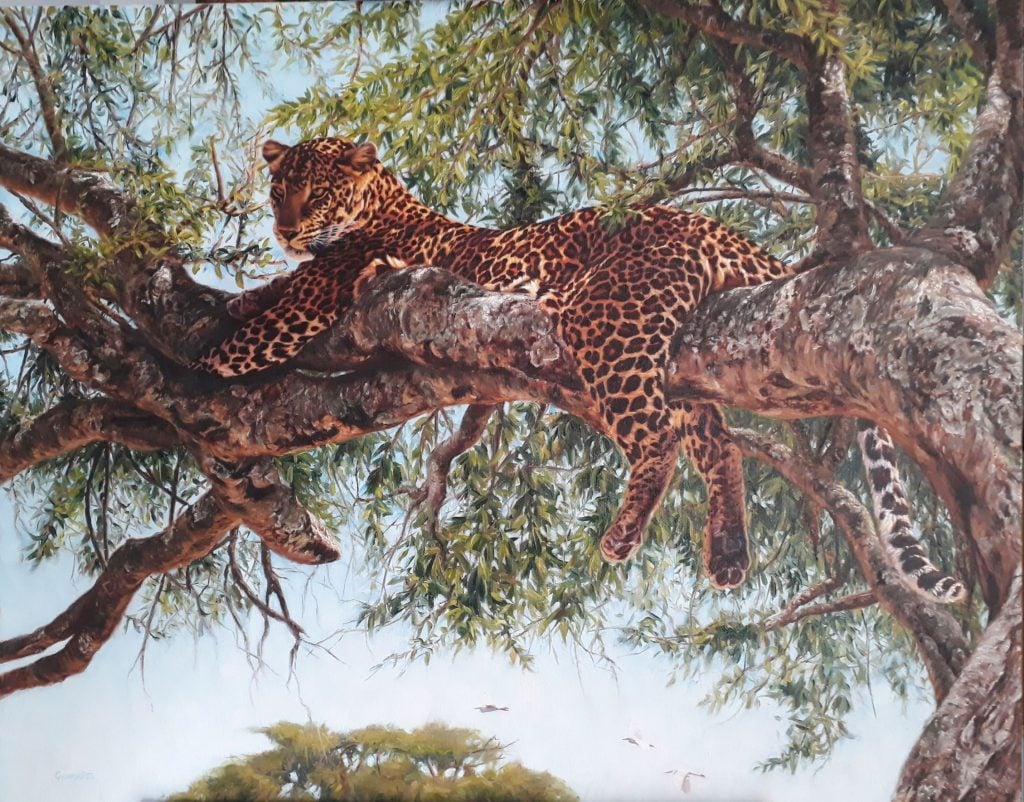 I dedicate most of my spare time to painting and creating ideas for new works, using my photos as well as some from friends for my reference. I have been inspired by many artists, but particularly painters such as David Shepherd, John Banovich and Andrew Tischler, who has been a great source of inspiration and personal advice. I love creating pictures of wildlife from different parts of the world, such as those inspired by trips to the West Coast of Scotland and photos from friends who have travelled around Africa. I have also painted a few portraits of family members and friends and I’m planning to do more in the future. 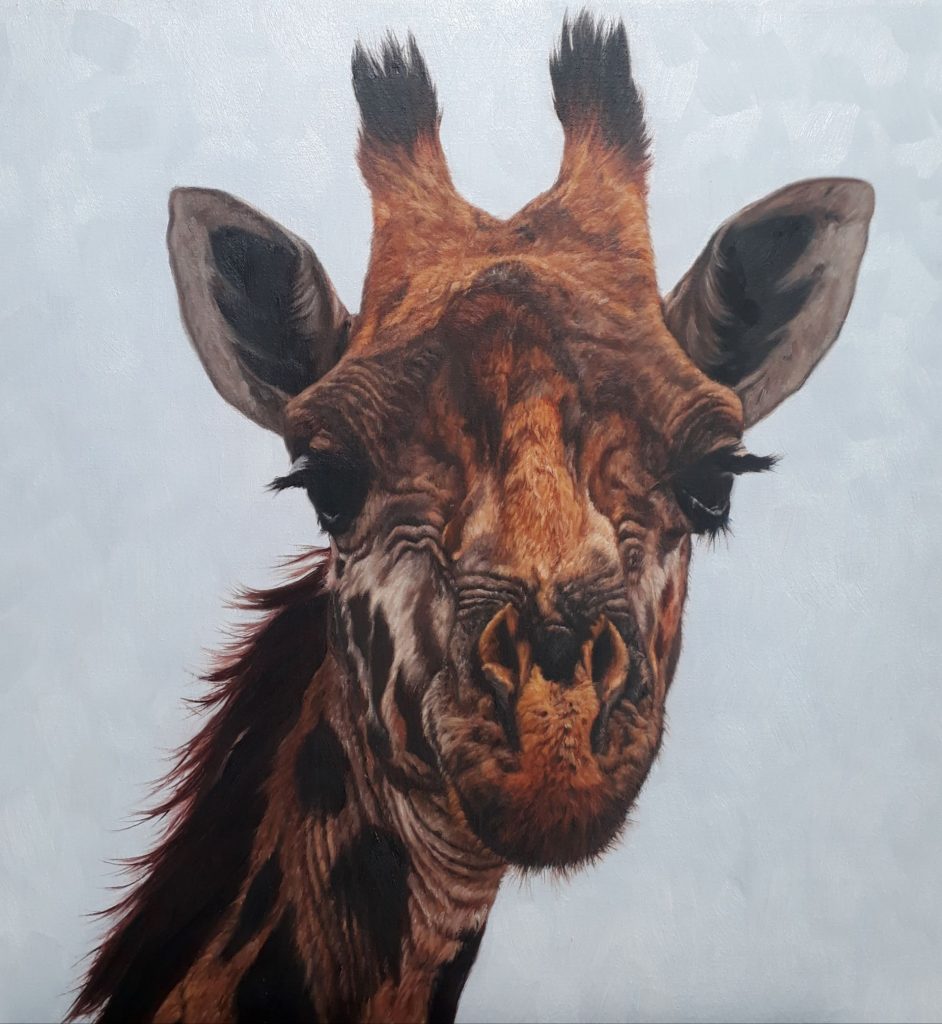 During the first lockdown I was given extra time and freedom to paint as I was unable to sit my GCSEs. I was able to start a series of African wildlife, some Arctic wildlife paintings and a couple of portrait commissions.”

I think you will agree with me that George is an amazing painter, a rising star and his hard work and raw talent deserves to be showcased. 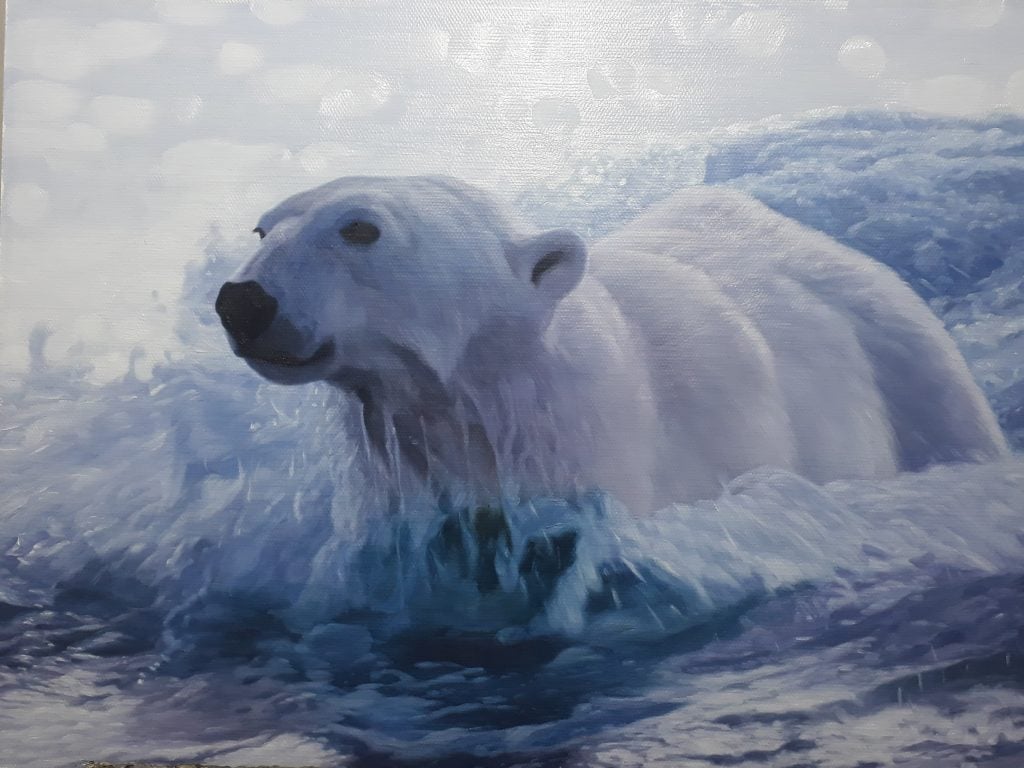 Here are some of his achievements and exhibitions:

Member of the Association of Animal Artists

We were approached by Rob some time ago, conveying his love for our brushes! We are lucky enough to receive lots of these lovely emails – but this one was particularly special to us.
Rob was born disabled, and from a very early age was taught to write, draw and paint with the implement held between his teeth by his home tutor.
I recently asked Rob if he would be happy to be featured on the blog and thankfully he obliged, as I know our readers would be inspired. This is what he had to say:
“My tutor often told me about the Mouth and Foot Painting Artists (MFPA), and to encourage me they sent me a set of paints.
Although I enjoyed painting, I left school and focussed on finding employment. In that time I got married and we had a daughter.
It was in 1998 that I successfully joined the MFPA as a Student Artist. Working full time meant it wasn’t until 2013 that I became an Associate Member.
In 2018 I retired from my job and threw myself into my painting. I found a brilliant art tutor, Kay Le Poidevin, who not only pushed me to try different styles of paintings, but who also introduced me to Rosemary Brushes. 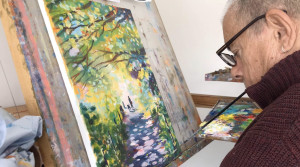 The brushes were a ‘game changer for me’. I found them really robust (a lot of my brushes previously got chewed up very easily), they allowed me to apply marks to my paintings in a much more thoughtful manner and best of all, I was able to choose the long handle brushes.
I’ve been using the brushes for three years, and last year I achieved my ambition of becoming a Full Member of the MFPA.
I’m also delighted that one of my paintings, produced using Rosemary Brushes, was selected as a card for this years MFPA Christmas pack!” 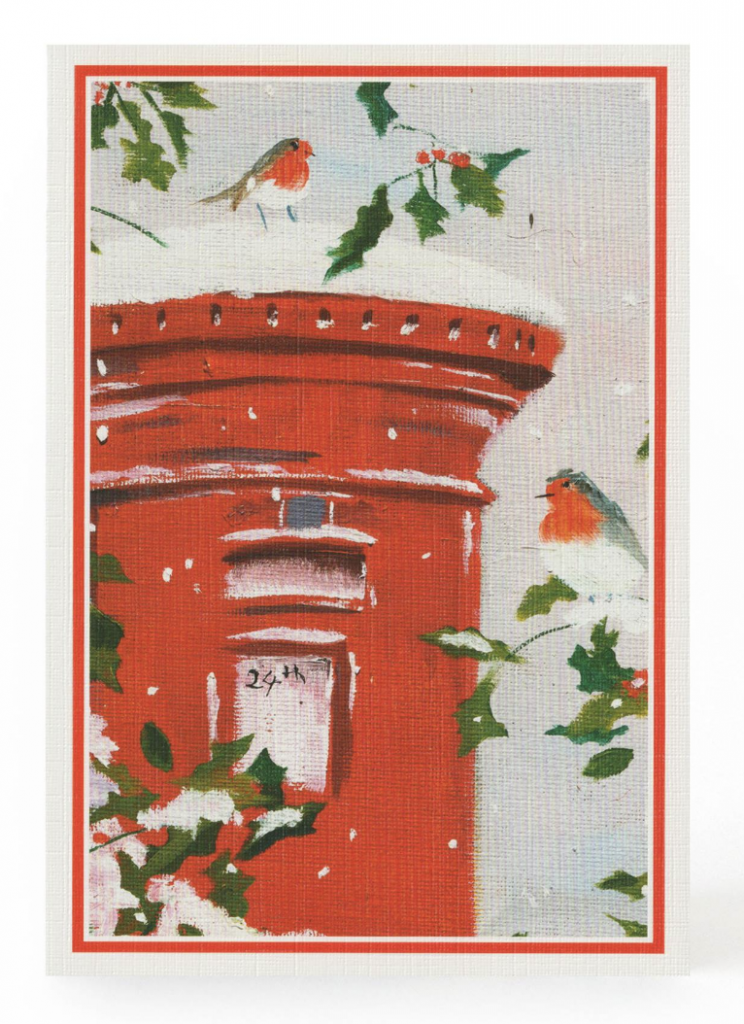 “Post Box Robins” Gift cards are available to purchase at this link:
https://www.mfpa.uk/shop/products/christmas-card-no-2118-postbox-robin
Roberts Work can also be found on the MFPA website, check it out by clicking here!
Posted 25.08.2021

Phil Courtney is a long time user of Rosemary Brushes and it is about time we shared his absolutely stunning work with you all. Phil graduated from the Pennsylvania Academy of Fine arts located in Philadelphia and has been in the industry ever since. Exquisite both in Oil and Water colour,  Phil always manages to capture the beauty of his subject material.

If you would like to see more of Phil’s fantastic work and to see his process, workshops and online shop, please check out his website: www.philcourtney.com 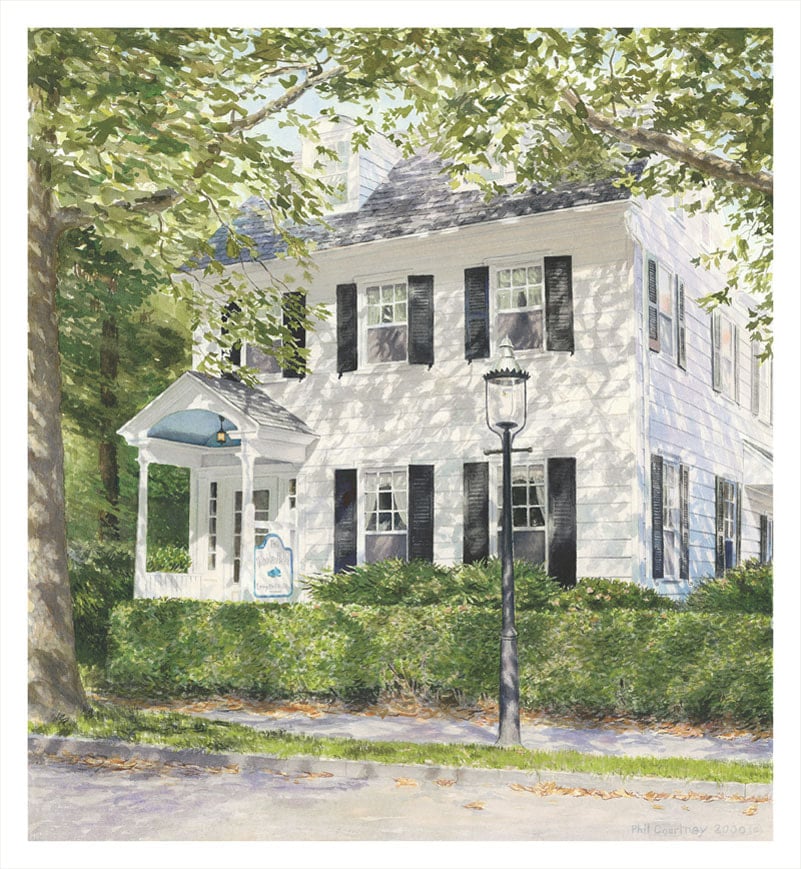 Thank you Phil for allowing me to show off your art! The watercolours are my personal favourite, especially “The Wooden Rabbit”!

After a few years of cancellations we are so happy to announce: we will be back at Patchings for all 4 days this July! This fabulous traditional event in Nottinghamshire has been hosted for almost 3 decades and shouldn’t be missed for art enthusiasts of all ages. With a chance to meet Artists, Photographers, Craft Makers and Designers you […]

We’re beyond excited to welcome one of the most fantastic Master Painters, and close personal friend to Rosemary and Symi….Kathy Anderson back to Yorkshire for a third time in 2020! Starting on the 1st-5th of August 2022. This workshop has been postponed from 2020 & then 2021! We are eager to all be together for 2022. […]

We’re beyond excited to welcome the wonderful Daniel J. Keys for the first time to Yorkshire alongside close personal friend to Rosemary and Symi….Kathy Anderson. Starting on the 1st to the 5th of August 2022. This indoor workshop was cancelled in 2020 and 2021 so we are excited to finally make this happen! The workshop will […]